Having a strong tradition of Buddhism, Vietnamese always believe that the full moon is a significant time in the lunar month. In Vietnam, these traditions have morphed into many festivals including the popular Hoi An Lantern Festival which is held to celebrate the full moon. It is said that the full moon is one of the most sacred times in the Buddhist calendar because Buddha was not only born on a full moon but attained enlightenment on a full moon. Nowadays, people all over Asia view the full moon as a time to meditate, observe rituals, reflect on life and worship their ancestors. This is done in many ways from offerings made at family shrines to the burning of incense and the lighting of candles. 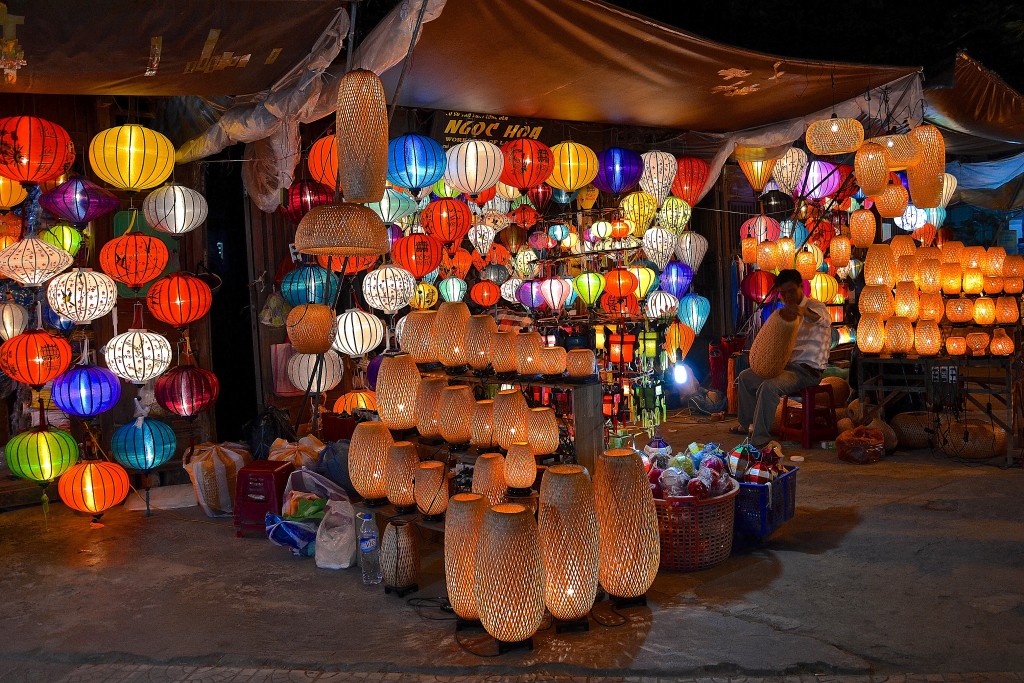 The Origin of Hoi An Lantern Festival
During the 16th and 17th centuries, Hoi An was an important port of the country which bustled with merchants from around the world. At that time, many Japanese also came here and brought with them variously shaped lanterns that they would hang in front of their homes. Since then, the locals began to imitate this in similar hopes of bringing good luck to their households which was contributed to the development of the traditional lanterns. The diverse culture of the ancient town has been widely associated with lanterns. Understood that thing, the local authorities decided to combine lanterns with the monthly full moon celebrations in 1998. Since then, both Vietnamese and international tourists have flocked to Hoi An each month to participate in the celebrations.

Best Things to Do & See in Hoi An Lantern Festival
As the name suggests, this festival is full of colorful lanterns which are lit with candles and placed on the Hoai River with a wish for happiness, luck, and love. In the festival day, all fluorescent lights are turned off at 8 pm so that the floating lanterns are all that illuminate Hoi An, creating a magical glow. All vehicles and bicycles are banned in the town, so tourists can wander around and soak up the atmosphere without fear of walking into the path of a motorist. Attending the celebration, you can enjoy many impressive performances which are held along the river with music and poetry readings. Strolling around the town, you will see locals playing board games outside their homes while others gather for Bai Choi – a musical version of bingo.

You also can taste a ton of mouthwatering street food including delicious vegetarian food. It’s a great time to try tasty moon cakes and shop at the busy night markets. The celebration will finish at 10 pm. Locals think that the full moon is a time to honor deceased relatives and ancestors, therefore, they often visit shrines and present offerings of flowers, food, and candles as well as fake money bills in exchange for prosperity during that time. 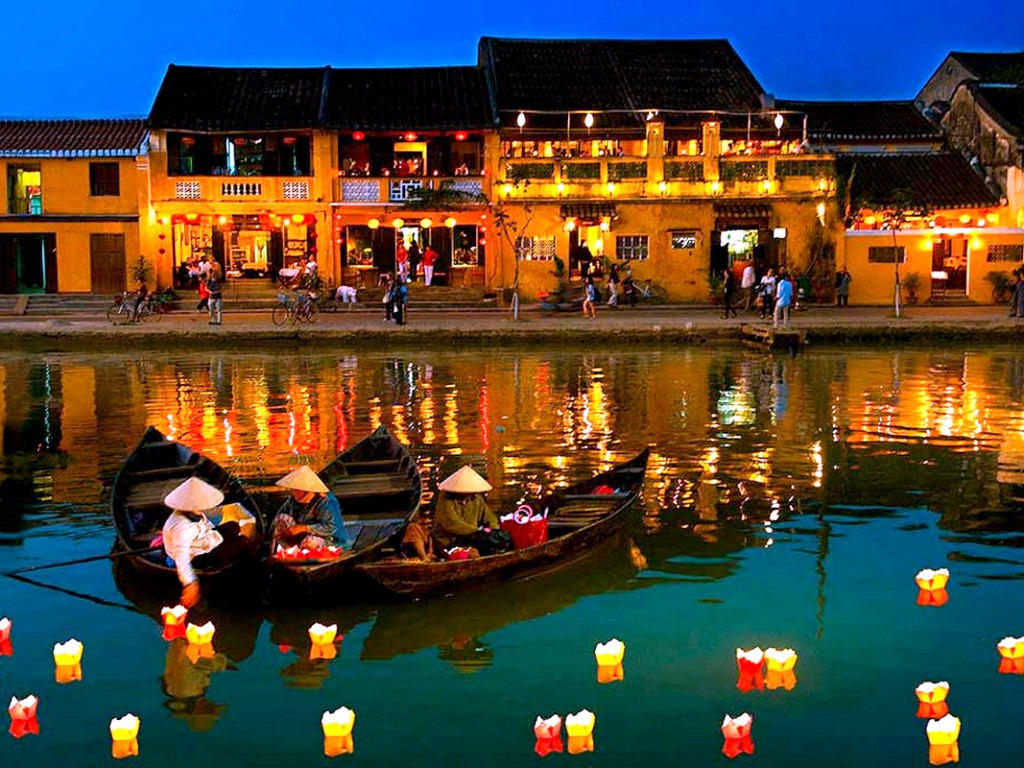 Êxperience serence sampan rides
If you want to release a lantern into the river, you can buy a colorful lantern which only costs around VND 10 000 per one. If also can sail your lantern off from the river itself by paying about VND 100, 000 for a traditional boat ride along the river. It is a nifty way to experience the cheerful night, enjoy views of the ancient town and the bright full moon on a serene ride.

Tasting Yummy Street Foods
Visiting Hoi An ancient town, you can sample a ton of local dishes such as cao lau (rice noodles with pork and veggies), chicken rice, or banh bao (steamed rice dumplings with pork and mushrooms). Soak into in the market of the town, you will be excited by a lot of tasty dessert like banh dap, banh beo, banh bot loc, che xoa xoa, etc. Do not forget to pick up some souvenirs for your family member and friends.

Entertaining Traditional Shows & Games
Attending Hoi An Lantern Festival, you can enjoy many traditional performances as well as take part in many interesting games such as bai choi which is the Vietnamese bingo game which it’s a musical bingo played with chess characters on cards. It seems difficult to play without a local-speaking guide, but as a tourist, it’s still fun to watch.

The Hoi An Lantern festival itself is free to participate. Wander around the town to the riverfront in the evening to explore the colorful Hoi An lantern festival. People often gather around the Japanese Bridge or the bridge that connect An Hoi island to Hoi An ancient city. The ceremonies that take place in the various pagodas are also free to visit. Buy a lantern or take a boat (sampan) along the river if you like.

To immerse yourself into the atmosphere, witness the most impressive activities, and see lanterns released on to Hoai River, you should walk around the area between the Japanese Covered Bridge and the Cau An Hoi Bridge.

To make sure your camera does not be knocked out of your hand when taking photos near the river, you should use a wrist strap on your camera.
Take your Hoi An tour in February to attend the first full moon of the lunar new year which is the biggest celebration of them all
You should arrive early to get a good spot because the town, especially the area along the river is so crowded on the festival day. 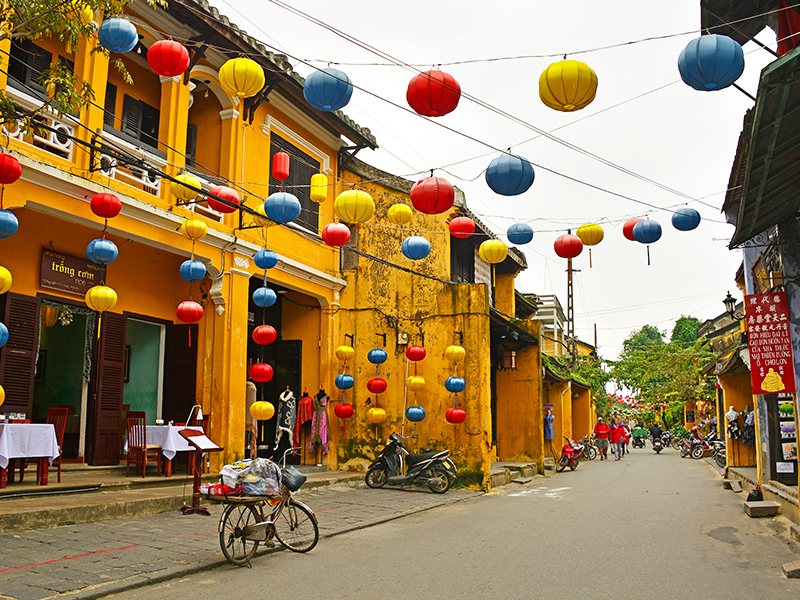 Taking a sampan ride on the river is a good way to watch the festivities away from the masses
You just need paying around 50 cents if you want to try lowering a lantern onto the river.
You should wear a sturdy and comfortable pair of shoes to walk around the ancient town.

(+2% ADDITIONAL DISCOUNT FOR LOYALTY PASSENGERS) ONLY TO 31DEC 2015! BEST hunts FIRST! – CHECK DETAILS OF PROMOTION In the following PDF

You are guaranteed that you are buying at the lowest possible price on the market and you are buying from us at the lowest price. We will refund you the difference if you find to Dec 31 offer a more favorable price with another tour operator. The offer, however, should concern: the same deadline, hotel, room type, the tour program, the type of your trip, place of departure and return and the same dining options. The guarantee does not apply to offers Last Minute.

Quick decisions reward the many benefits. We request only 20% total payment when making a reservation. You can pay by bank transfer on our account indicated on the contract or through Paypal account. The rest of the amount should be paid more than 30 days before departure.

FREE WAIVE GUARANTEE FOR ANY AMENDMENT – UNTIL 31DEC 2015

If you make a reservation for December 31, 2015 you will receive a free guarantee of rebooking. If you have to change the date and type of departure, tour program with different direction, or hotel, you will not be charged with any FEES, up to 45 days before departure. The price will be recalculated in accordance with the update booking amendment, subject to availability of hotels, airplanes and tour program. You will only have to pay the difference if the new price is more expensive on the other hand we will refund you the difference if the calculation of price would be cheaper. And the discount on final price will be still applied.

Our Loyalty program offers many advantages for our regular customers: an additional discount of 2% on all current promotions, 5% off list prices not covered by promotions and a 5% discount on Last Minute. The promotion applies to all bookings in 2015/2016. Promotion applies only to individual reservations, and a catalog offer. Not applicable procurement group more than 20 people.

On all our holidays you must have comprehensive travel insurance that covers you for medical costs associated with hospitalisation, emergency travel and repatriation back to your home country. We encourage you to buy insurance from your country before traveling and please bring a copy along to the journey in urgent case we need to show it.

365 Travel is due solely to causes beyond its control without its fault or negligence including without limitation acts of God, strikes, fires, war, riot, flood, industry wide inabilities to obtain products and/or services necessary to complete the provision of services and products. We will provide passengers with substitute services. We shall offer assistance to passengers to minimize the effects of the Force Majeure event as much as possible. In the event of Force Majeure situations, we will provide advice immediately describing the status of the situation and actions taken followed by regular updates if necessary.

In all cases, please contact our consultants directly for any urgent help. We are here to support you with all of our best!